I Am a Triangle

HomePublicationsArticles by Global WomenI Am a Triangle

I Am a Triangle

The following is a simple parable and yet, at the same time, it is quite enlightening. When a shorter version was originally shared at a debriefing through Mission Training International (MTI), I thought it to be very profound. As global women, I believe you will also connect with it. 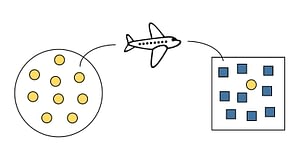 While Circle Sally lives in the midst of Square people, some things will inevitably rub off on her. Sally may come to value and admire some of the practices and attitudes of the Squares and, to a certain degree, she will adapt to the ways of Square Culture. Circle Sally may experience a certain level of comfort living in Square Country, but Sally will not ever quite absorb the Square Culture. As much as Circle Sally may eventually feel like she fits in, she will never truly belong. Sally will never truly be a Square. She is, after all, a Circle.

However, by living within Square Country and while surrounded and influenced by Squares, Circle Sally will also lose a bit of being a Circle. It happens subtly and over a period of time, as Sally embraces some of Square Culture. It is very imperceptible, but in her heart, Sally realizes more and more that she is not as yellow and circle-shaped as she used to be.

Now no longer 100% a Circle, and certainly not a Square, Sally will live life in the “in-between.” It will be as if she has, instead, transformed into a Triangle person. Sally has undergone a metamorphosis, deep down inside. Her shape and her color have evolved into a different shape and color. Sally has the tints of her two life experiences and cultural norms—yellow and blue—but they have now merged and become green.

She is different. Without knowing it, Sally slowly and unconsciously changed by living in that different country, Square Country. By being surrounded by different kinds of people with a different culture—Square Culture—she slowly realizes she has a mixture of the two cultural distinctions. Sally has shared many life experiences with Squares. She has created a history within Square Country.

This awareness of having changed is not a bad thing. It actually seems very natural and okay to Sally. She welcomes it. After all, she was sent to Square Country by God, and His desire is that she love Square people.

Now if Sally—a newly-developed Triangle—gets on another plane and returns to her original Circle Country, she boards the plane as a Triangle.

Once arriving back in Circle Country, she is vaguely aware that she does not quite fit in any more. The vast majority of Circles have never lived outside of Circle Country. Sally realizes and accepts that it is not their fault; Circle people simply have no point of reference to relate to their friend, Sally, who was off living far away. They are also likely confused about this seeming transformation in Sally.

Sally realizes she will remain a Triangle, even when she is home in Circle Country. She begins to realize that she will always be a little bit of Circle and a little bit of Square. Sally will never quite fit in like she used to in her own country and in her own culture.

Before she left Circle Country it was so comfortable and easy, interacting with other Circles. Nothing seemed to require any effort. Back then, it was all she knew. Now, because Sally is different, things are awkward. She sometimes finds it to be hard to be a Triangle.

Sally was not expecting this. It is, however, inevitable—it is simply the nature of the beast. Now Sally is somewhere in the middle, not fully a Circle and not a Square either. Sally lives and exists in the “in-between.”

She realizes and comes to accept that she is—and will always be—a Triangle, living in-between two countries, two cultures, and two shapes of people. 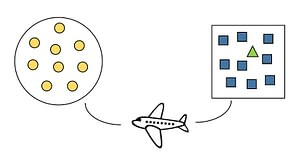 When I am in Square Country, during field-stays, I am a Triangle.

When I am in Circle Country, for home-stays or to permanently repatriate, I am also a Triangle.

Question to consider:  As a global woman, have you also become a Triangle?